Shock of the Anvil 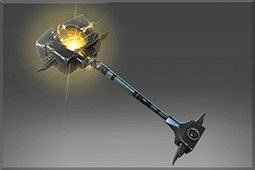 No mere battle hammer this. The Shock of the Anvil is the immovable object upon which a generation of weapons were born. Each battered and shaped upon the iron, and each imparting some vital essence, until at last the anvil crackled with piezoelectric power. When Magnus saw the hammer the blacksmith intended for him, he scoffed, choosing instead to make a weapon of the anvil itself.