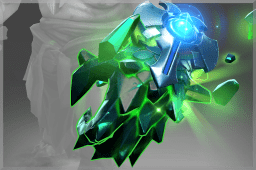 Forced to his knees before the altar of his own temple, Prelate Vidmar, head of the Order of the Crystal Echelon, knew vile hatred. His flock--acolytes and supplicants alike--lay in pieces around him. As the creature--it could not be called a man--raised its demonic hand once more, the Prelate focused on the fire of his own rage. With final breath, as Lion's dreadful power crashed into his body, Vidmar cursed the Demon Witch. Strengthened by the arcane conduit of the Demon Witch's spell, the Prelate's curse surged into Lion's hand, corrupting it with Crystal Rot. Only by fusing the Prelate's modified headpiece to the afflicted flesh was Lion able to slow the creep of crystalline blight...and a time will come when a more permanent solution must be found.