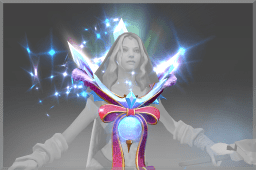 In an age now lost to time, the Frozen Witch Yulsaria ruled the whitelands, summoning blizzards and hail storms upon those who displeased her, while an army of ice golems roamed the lands to snuff out all warmth. In time, her southward expansion angered the Eldwurm Slyrak who, in his terrible rage, melted Yulsaria's armies with his endless flame before conquering the Frozen Witch herself. Now, centuries later, shifts in the ice have uncovered yet another shard of her empire: her frosty mantle.

Immortal items cannot be traded or marketed through The International 2018, but can still be gifted once.