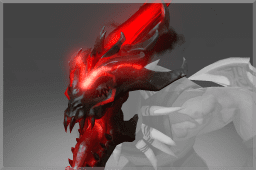 The thirst of Eztzhok became insatiable, and with each feast the demon's share of the Twins' tributes grew larger. As Eztzhok's gaping maw began to twist the visage of their loyal Hound, the Flayed Ones realized nearly too late that the reclamation of their Bloodseeker would not come without sacrifice.